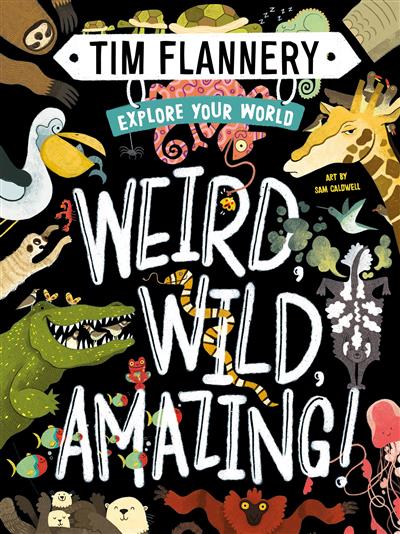 Loading...
Get&#160;ready for a whole new look at the world around&#160;you.&#160; You&rsquo;re about to meet the weirdest, wildest and most amazing animals on the planet. &#160; Are zombie View more
Save for later

Professor Tim Flannery is one of the world’s leading scientists, explorers and conservationists. He’s spent most of his life studying the natural world – from mammalogy to palaeontology – and has had some incredible adventures along the way, including floating down crocodile-infested rivers and wrestling pythons. He’s discovered 75 new species of animals – some that are still living, and others that have been preserved as fossils. He’s worked at museums and universities in Australia and around the world, including as Director of the South Australian Museum, Visiting Chair in Australian Studies at Harvard University and Distinguished Visiting Fellow at the Australian Museum. He established and co-chaired the Copenhagen Climate Council, was appointed Australia’s first Climate Commissioner and is the Founder and Chief Councillor of the Australian Climate Council. In 2007, he was named Australian of the Year. He has published over 140 peer-reviewed scientific papers and more than thirty books, including the award-winning Here on Earth (2010), Atmosphere of Hope (2015) and The Weather Makers (2005), which has been translated into over 20 languages. His books for children include the best-selling Explore Your World: Weird Wild, Amazing!, Explore Your World: Deep Dive into Deep Sea and Explore Your World: Weirdest Creatures Through Time.
Close