Library Browse MR CHICKEN ALL OVER... 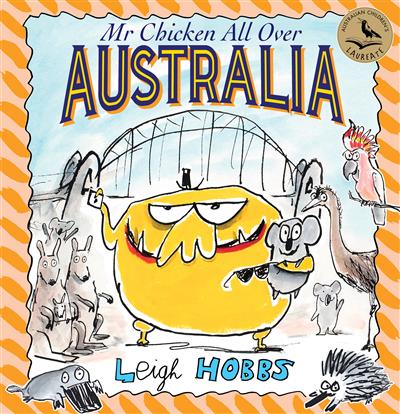 Mr Chicken All Over Australia

Loading...
Australia is big, but so is Mr Chicken. He can't wait to go everywhere, see everything and meet everyone. Luckily, a helpful marsupial from Tourist Information helps Mr Chicken View more
Save for later

Leigh Hobbs works across a wide range of artistic mediums, but is best known for his children's books featuring Old Tom, Horrible Harriet, Fiona the Pig, the Freaks of 4F, Mr Badger and Mr Chicken. Old Tom is also a popular TV series, and Leigh has won every major Australian children's choice award. Mr Chicken Goes to Paris was shortlisted for the Prime Minister's Literary Awards, is a bestseller at Paris's Louvre Bookshop, was adapted for the stage by NIDA, and was shortlisted for the CBCA Awards - as were Horrible Harriet and Old Tom's Holiday. In 2019, Leigh received one of five Australian Legends of Children's Literature awards from Australia Post and was featured on a stamp. Since childhood, Leigh's had a passion for art, architecture, classical music, English history, and he loves London, Paris and Rome as much as his beloved character Mr Chicken. His time as the 2016-2017 Australian Children's Laureate meant travel to every corner of Australia, and Mr Chicken All Over Australia is a fitting celebration of all the places he's been and the people he's met.