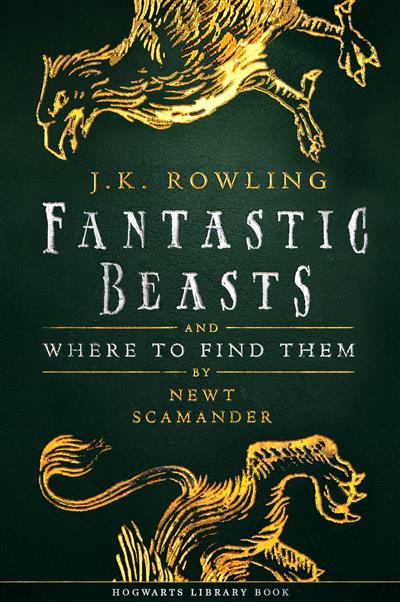 Fantastic Beasts and Where...

By J.K. Rowling, By Newt Scamander

Loading...
"A glance through Muggle art and literature of the Middle Ages reveals that many of the creatures they now believe to be imaginary were then known to be real." As every fan of the View more
Save for later

Newt Scamander (Author) Newton ('Newt') Artemis Fido Scamander was born in 1897. His interest in fabulous beasts was encouraged by his mother, who was an enthusiastic breeder of fancy Hippogriffs. Upon leaving Hogwarts School of Witchcraft and Wizardry, Mr Scamander joined the Ministry of Magic in the Department for the Regulation and Control of Magical Creatures. After two years at the Office for House-Elf Relocation, years he describes as 'tedious in the extreme', he was transferred to the Beast Division, where his prodigious knowledge of bizarre magical animals ensured his rapid promotion. Although almost solely responsible for the creation of the Werewolf Register in 1947, he says he is proudest of the Ban on Experimental Breeding, passed in 1965, which effectively prevented the creation of new and untameable monsters within Britain. Mr Scamander's work with the Dragon Research and Restraint Bureau led to many research trips abroad, during which he collected information for his worldwide bestseller Fantastic Beasts and Where to Find Them. Newt Scamander was awarded the Order of Merlin, Second Class, in 1979 in recognition of his services to the study of magical beasts, Magizoology. Now retired, he lives in Dorset with his wife Porpentina and their pet Kneazles: Hoppy, Milly and Mauler. J.K. Rowling (Author) J.K. ROWLING is best known as the author of the seven Harry Potter books, which were published between 1997 and 2007. The enduringly popular adventures of Harry, Ron and Hermione have gone on to sell over 500 million copies, be translated into over 80 languages and made into eight blockbuster films. Alongside the Harry Potter series, she also wrote three short companion volumes for charity: Quidditch Through the Ages and Fantastic Beasts and Where to Find Them, in aid of Comic Relief and Lumos, and The Tales of Beedle the Bard, in aid of Lumos. J.K. Rowling collaborated with playwright Jack Thorne and director John Tiffany to continue Harry's story in a stage play, Harry Potter and the Cursed Child, which opened in London in 2016 and is now playing worldwide. In the same year, she made her debut as a screenwriter with the film Fantastic Beasts and Where to Find Them, the first in a series featuring Magizoologist Newt Scamander, which was inspired by the original companion volume. J.K. Rowling has also written a standalone novel, The Casual Vacancy, and is the author of the Strike crime series under the pseudonym Robert Galbraith. Both have been adapted for television. She has received many awards and honours, including an OBE and a Companion of Honour for services to literature and philanthropy. She lives in Scotland with her family.
Close