Library Browse OUR LAST TRIP TO THE... 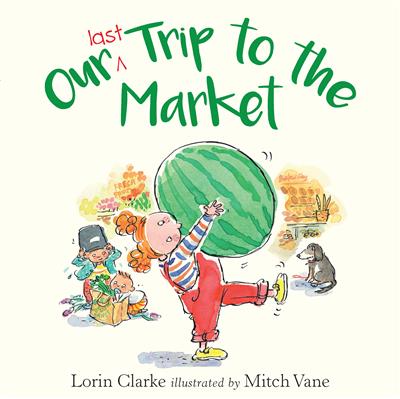 Our Last Trip to the Market

By Lorin Clarke, By Mitch Vane

Loading...
What a fabulous morning to go to the market. That busker is dressed as a clown! And there's fruit and a baker. There are people on bikes. Annabelle, please put that down... This boisterous family excursion is full of warmth, humour and delicious mischief.
Save for later

Lorin Clarke is a writer who likes to talk so she has spent a lot of her time working in theatre and radio. She has an arts/law degree and she also writes about law and culture. She co-presents the Stupidly Small podcast. She has directed over a dozen comedy shows for the comedy festival and Melbourne Fringe, and has worked as a broadcaster and producer at Radio National, the Austereo Network, ABC Melbourne, and 3RRR. Lorin is quite good at cartwheels, but has never quite managed a backflip. Mitch Vane works in a variety of mediums but her favourite is a good old-fashioned messy dip pen and Indian ink. She often collaborates with partner and Age writer Danny Katz & they are best known for the YABBA Award winning Little Lunch series. Mitch has created many other children's books, including Danny Best: Full On by Jen Storer, The Patch by Justina Chen Headly, Bed Tails by Meredith Costain ( Penguin ) and many books in the Aussie Nibbles series. www.mitchvane.com